What? This is Iran?

“I am so confused,” the late bad-boy chef turned TV travel host Anthony Bourdain said in 2014. “It wasn’t supposed to be like this. Of all the places, all the countries, all the years of traveling, it’s here, in Iran, that I’m greeted most warmly by total strangers.”

First-time visitors of Iran often report going through some version of the following three stages:

I’ve seen so many worry-shock-joy reports, like Bourdain’s, that it’s become routine.

(The positive reports are so routine that I’m looking forward to the report that says the opposite, something like, “my trip to Iran was horrible, these people are indeed the hateful religious fanatics everyone thinks they are; all the negative stereotypes are true!”  No, I’ve yet to see such a report but I’m waiting.)

This page contains a few of these worry-shock-joy reports:

I arrived in Iran as all western travelers do: loaded with prejudice. The image that we have of the Ayatollah country, a thousand times spread, is black, very black. A country where everything is forbidden, where everything is sin and where you get spanked for dancing the Happy.  [But] I have seen few people as friendly, open and willing to go abroad as the Iranians. And anyone who has traveled the country will confirm my opinion. https://theunionjournal.com/tourism-in-iran-isfahans-spell-the-traveler/

Dutch Filmmaker Reinier van Oorsouw: Whenever Iran is in the news, it is about something negative. That made me skeptical — can a country be as bad as the media depicts it as? I wanted to investigate for myself if Iran is open to foreigners and if it is a safe place to visit, and also share my travel experiences with the world.

From Iran, the majority of feedback is positive. People are happy that a different light is being shone on their country …. From international audiences, I had a mixed response: Some people are genuinely surprised, while others think I’ve been hired by the Iranian government.

Article on Fair Observer: Is it Safe to Travel to Iran?

I must admit, the morning I left the house to start my travels, I suddenly started to get nervous. What if this would be the last time I make a cup of tea in this kitchen, the last time I would drive down this road?

My mind started going crazy. What if my family was right and I was just being stubborn in going ahead with the plans I had made? What am I doing?! …

I saw so many different and unique places, all of them amazing. The people were, 99 per cent of the time, very friendly and excited to see me in their country.

The one per cent were mainly wondering, out of confusion, why I was there with my camera as they were not used to seeing people like me there. 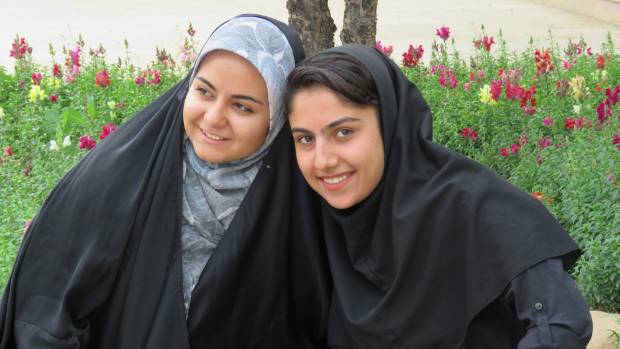 Despite the erroneous western image of a “hostile country populated by flag-burning fanatics”, welcoming smiles were everywhere during our three-week visit to Iran.

Tourists are not hard for locals to pick out – there aren’t that many around due to the totally erroneous image in the West that Iran is a hostile country populated by flag-burning fanatics.

Nothing could be further from the truth. Iranians must rank among the most friendly and hospitable people in the world.  My delightful encounter on a street in Tehran was to be repeated by both men and women in cities across the country: “welcome to Tabriz/Kerman/Yazd/Isfahan”.

Why I visited the one place people warned me to avoid

These were some of the most common responses I received when announcing my upcoming plans to visit the country.

“I hope you’re not becoming a fundamentalist,” another friend half-joked.

Iran not what I Wundered it to be

We sure as hell were wrong about Iran.

“In many ways, Iran has surprised me. Before coming here, my impressions of the country were largely shaped by Argo … Tehran has been a revelation. I can only hope to be back some day.”

How Is Hitchhiking As A Woman In Iran?

Never before have I been to a country whereby the preconceptions of it are so far away from reality. There is no war in Iran, the country is generally safe, and the living standards are comparable to those from Europe. The architecture is gorgeous, the landscapes diverse and the people ― the people of Iran are the best. They are incredibly kind and friendly, and always eager to meet foreigners with an open door and a cup of chai. It really is an amazing country.
http://www.huffingtonpost.com/entry/how-is-hitchhiking-as-a-woman-in-iran_us_576f6e63e4b02b2166551dbe?

56 Days Hijabbing it in Iran

Kylie Wearing the chador in Shah Cheragh, ShirazIran is a contradiction in itself; … We get told its like Saudi Arabia and that the people are oppressed and its dangerous. But instead everything is possible – but only behind closed doors. …

If someone in Iran says “you are my guest”, expect them to take complete care of you. It is one of the safest countries in the world for tourists.

56 Days Hijabbing it in Iran

First Cuba, Now Iran? Tourism is Booming in the Most Unlikely Places

Before we set off to Iran there was fear. … Such was the response to us, an American couple, going to Iran.
… It surprises people — we sometimes think they don’t believe us when we tell them that Iran was the country where we felt most like rock stars.

Alone in Iran – What Was I Thinking?

“Most people whom I talked with about my trip offered me strong words of caution, with some even trying to convince me not to go, especially alone. The thing is, I haven’t felt alone once since I landed in Iran. … So far my experience backpacking in Iran has only been one of warmth and hospitality, and really, really amazing food!”